Hi everyone,
So you know that we've been playing a campaign loosely based on the Blood in the Badlands campaign released by GW.  Well, much as many campaigns do we literally managed our way almost half through the allotted campaign before it came to a grinding halt due to real life.

I re-modeled my bathroom, Ryan had a baby and our friend Josh put the real nail in the coffin by accepting a job offer in Portland, OR.  So much for finishing.  However in lieu of being able to complete the campaign we decided that hte next best thing would be to have one big mega battle before Josh leaves and so we got together on July 7th for just such a thing.

We got ourselves an 8ft table and proceeded to throw out some terrain and have ourselves the battle royal that we knew we'd have.  We began officially moving at about 10:30 AM.  You can see in the pictures below the setup and some of our first move before Dan's artillery began just hammering us to death.

Dan's Magma and Deathshriekers really did a number on Josh and Ryan's infantry blocks.  They did very little to me though.  Ryan and I took the Pegasus Knights and Dragon up the flank closest to the camera to eventually kill one of Dave's Skullcannon's although Ryan lost the Dragon very shortly after.

Here you can see some results of the first combats of the game taking place around turn 2/3.  My Lord and BSB unit got triple charged by the horrifying threat of Chimera, Bloodthirster and Demon Prince which I actually won the combat against via an HKB on the Thirster.  This combat would then persist to last almost the entire rest of the game finally ending on turn 4 with me the victor after a HKB on the Prince and chasing the Chimera down.  Chips Chaos Knights eat through one of my Knight Lances to push off of our table edge whiel the Chaos Warriors begin to position themselves for some combat with Josh's Dwarfs.  Dan happilly continues to hammer us while my Pegasus Knights and Pegasus Hero begin to hit his war machines.

Again her above we see the Chaos Warriors positioning and then in the last picture making contact with the Dwarfs to blow through one unit and be held up on the other.  My Pegasus after killing the Demonsmith and Deathshrieker charge and eventually run down a unit of Blunderbuss.  You can also see in the 2nd picture all of Ryan's Archers and my Peasant Bowmen being finished off by Dave's Bloodcrushers. 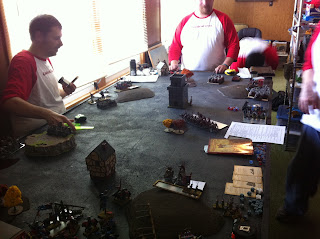 Finally as the game wrap's up you get to see what very little the side of good has.  I have my Lord's lance who through some Regrowth has not only survived but managed to wrack up an impressive amount of points even taking Dan's other Deathshrieker before the end but the Pegasus Knights are still alive as well.  Sadly at this point you also witness what little is left as the only remaining Dwarf on the board is Josh's Runelord with Anvil and although not pictured is Ryan's Archmage hiding behind a tower.

Conclusion?  Dan's artillery made it nearly a non game and the only reason I had so much alive is that I managed to be in combat for probably 4 of their 6 rounds of shooting.  The Chaos Dwarf artillery accounted for so much destruction of our infantry that by the time combat came the Bloodletters and Chaos Warriors simply had mop-up duty.  It was an absolutely crushing defeat.

It's a bummer that we don't get to finish our campaign; but we had a hell of a day of Warhammer sending our friend off to his new home on the other side of the country.  We finished cleaning up the table around 3:30 PM so our massive game of 12,000 total points (2,000 per player) took us just about 5 hours.  A damned good time was had by all.  Thanks for the fun fella's.

Lol it does seem that its a very few lucky gamers that get to complete a campaign. The last big battle seems a really fitting way to call time.