Turns out I would be completely remiss to not have already mentioned this, but last Friday May 31st Warhammer Quest was released for IOS devices such as the iPad and iPhones from Apple.  The game was produced by Rodeo Games from the UK and is a pretty awesome implementation of the original Games Workshop game.  It isn’t 100% convert though and it’s worth noting.

The primary losses from the old game to this computerized version of it are small bits like the lantern, the alehouse, some spells and skills and other pieces.  Still what they did transfer is absolutely the core of the game and that’s the important part.  They’ve also updated the characters, names and model representations to the current day models and background which means you no longer have an Elf but you have a Waywatcher.  Instead of a generic Dwarf you get an Ironbreaker and no longer is the Barbarian himself, but a Marauder instead.

Now I don’t feel that a review of Warhammer Quest is worthwhile frankly.  It’s a dungeon crawler game where you run through dungeons constantly killing monsters and collecting loot while leveling your characters up.  Very addictive game.  The graphics are very good and the gameplay is smooth and solid.  That isn’t to say there aren’t bugs in the game because there are, but they are certainly few and far enough to ignore.

An important part of the game much like any IOS game is to mention the monetization factor.  We all knew with GW being involved there would be a price tag to go along with the game and at first glance the game comes in at $4.99 which is really low.  Naturally it’s the downloadable content (DLC) that sticks it to you.  The game launched with 3 of the expandable characters, Warrior Priest, Trollslayer and High Elf Archmage at $2.99 a piece.  One of the other changes is that instead of having the entire enemy table available from the start you’ll only be fighting critters and Orcs & Goblins in the base game.  That is until you purchase the Skaven expansion at $3.99.  So, if you not only buy the base game but all the DLC your looking at an expenditure of $17.95 which after adding in tax will put you over $20 USD.  A bit of a gut shot, but let’s face it, if you’re going to buy this game then there’s probably a 95% chance you’ll be buying all the other DLC.  Also they gave the option in the game to buy Gold for cash which allows you to more quickly procure items from the shops in the game although I’ve found that you accumulate items and gold fast enough that I think it’s pretty unnecessary.

The game having come out is certainly encouraging me to get to work finish my Warhammer Quest set that I began painting nearly two years ago.  My base game is completed, but I do have a ton of expansion models and things to paint as well.  Also I really want to collect the models required to run the 3 level dungeon that comes in the roleplay book of the base game. I’m only actually missing about 10 or so models, but to find the kind that are of this old a style is somewhat difficult. 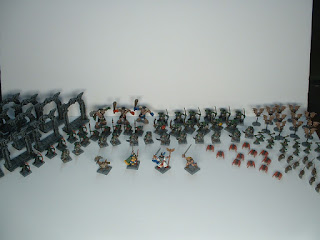 Well I want you all to think about this.  If you are an old GW fan who has fond memories of Warhammer Quest as I and many other hobbyists do, you should definitely check out the game, I felt it was well worth the money and even upon completion which is to say defeating all of the storyline quests and leveling all your characters to max you can continue to play in randomly generated dungeons forever.  $4.99 just doesn’t seem like all that much to ask for a game that can provide so much repeatable play.
Posted by Joe Flesch at 3:23 PM