So I haven't posted much since the New Years Resolution post and to be quite honest I haven't done much hobby wise; but I have done some and today I get to go over some of it to keep you all kind of in the loop.

First lets take a look specifically at the resolutions and their current positions.
1. Finish painting my Warhammer Quest set Not started yet.

2. Finish Bretonnian Army I've completed a Prophetess of Heavens and Lord on Pegasus; included pictures below.

3. Finish 2 Unfinished Projects Still working on Bret's so this is a no.

4. No More Board Games I'm not certain that IOS implementations of Board Games counts and I'll say no as they neither take up physical space and only cost a fraction of an actual board game; but I have bought a IOS version of San Juan.  An excellent game.  I'll also bought my kids a copy of Loupin' Louie! which could count as a fail but since it wasn't for me I'll still count this as a holding on although only by the skin of my teeth.

5. Play Every Board Game (And sell them!) I have since managed to play a couple games: Risk Legacy, and Lords of Waterdeep.  That's 2 down and about 120-130 more to go.

6. Run A Tournament I've made no progress on this at all.

7. Get My Son to Play Miniatures Haven't gotten working on this yet either.

9. Crack a Top 20 or Podium Award Haven't hit a GT up yet, 1st one of the year will be Adepticon.

10. Lose Weight I'm still making a steady drop; only a pound or two a week; but progressing.

So we can see some progress being made here although not all in a positive direction and for the most party stagnant items that haven't pivoted one way or the other.  At least its something, right?  We've completed the 1st turn of our Campaign and you can read about it and the start of turn 2 here: Round 1, Turn 2.  Also, I've nearly completed painting the map (image below).  I'm still working on my Bret's and getting fairly close to completing my Adepticon list.  I still have to paint 2 Character's and the 3 Pegasus Knights as well as finish highlighting my last unit of 8 Knights of the Realm; but that really doesn't seem like too much work to do in 2 months.  I also have to flock the trays but that's a single day project.

I'm really looking forward to Adepticon and even though I'm still only signed up for the Team Tournament and am numbers 7 and 9 on the 1k tournament wait lists respectively.  I'll take some 1k armies up with me regardless of whether a slot opens or not and hope that somebody doesn't show, or drops and hopefully make it in that way at least; but we'll have to wait and see.  I'm signed up for Blood in the Sun 3 and am talking with Chuck about heading north for Invasion Kenosha in July so I'm getting into the planning stages for my tournaments for the year.

There is also a 2,000 point tournament this weekend in our local store that I'll be running a different Skaven list at using a 7 man unit of Rat Ogres and  Warlord instead of Greyseer which I'll throw a couple of battle reports together for afterwards so keep an eye out for that.  I guess this is where I'll leave this post.  Hopefully in a week or two I'll have more for you to read.  Thanks for keeping up!

Bretonnian Porphetess and Lord on Pegasus: 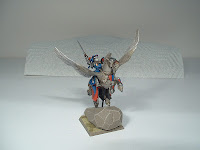 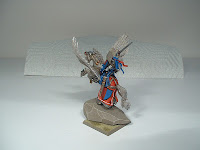 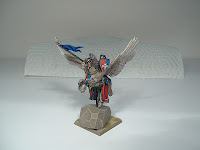 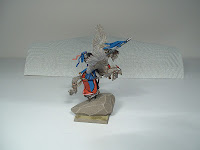 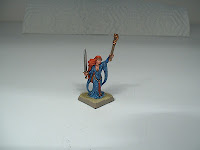 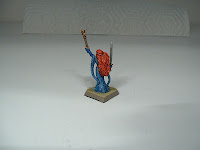 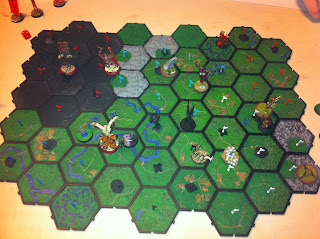