1. Buy No More Than 5 New Board Games
I think in 2013 I bought in the realm of 10 new games.  I think I should be able to stick to 5.
2. Participate in X-Wing League or Run Season 3 of Waaagh Cast Cup Blood Bowl League
I'm uncertain this will work.  Running the BBowl league is a lot of work and the local X-Wing
3. Play 4 Supplemental Rules Games
This one I can feel as practically done already.
4. Complete the Skaven
Totally doable
5. Paint 1,000 Points of Orcs & Goblins
Also completely doable
6. Attend Minimum 5 Local Events
Again! Completely achievable goal here.  Especially with me nixing out all out of town GT's except for BITS.
7. Top 10 Finish
This is a crapshoot.  With BITS being a 100 player tournament this year and me never scoring super well in tournaments I'm going to somehow have to take a hard army that doesn't make people hate it, play it well, somehow improve my sportsmanship scores (although I don't think I'm a bad guy I always perform low/middle in this category) and then I have to manage to get decent paint scores.  Not impossible, but I don't feel it is super likely.
8. Assemble 5 Tables of Terrain
Another uncertainty.  Last year I managed to assemble enough terrain to cover 2 tables, but none of that is painted still.  To paint and assemble not only those, but another 3 I think will be rough.
9. Run the Tournament
Dependant on the previous goal.  If I can actually get the stuff together this is totally achievable, but without the terrain clearly a failure.
10. Lose Weight
I have to get back to running and working on this.  Starting on new years day I began tracking my calories again with a resounding punch as I went a bout 1000 calories over that day.  As of the writing of this article I'm standing fast at my calorie goals the last couple of days.  Getting back to running is a bit more difficult.


So, January's goal was to complete item #4 on the list.  Finish Skaven.  Well guess what?  DONE!  I have assembled and painted the following:
1 Packmaster with Shock Prod
1 Packmaster Squeel Gnawtooth
2 Warlord/Chieftans
1 Skaven War Litter 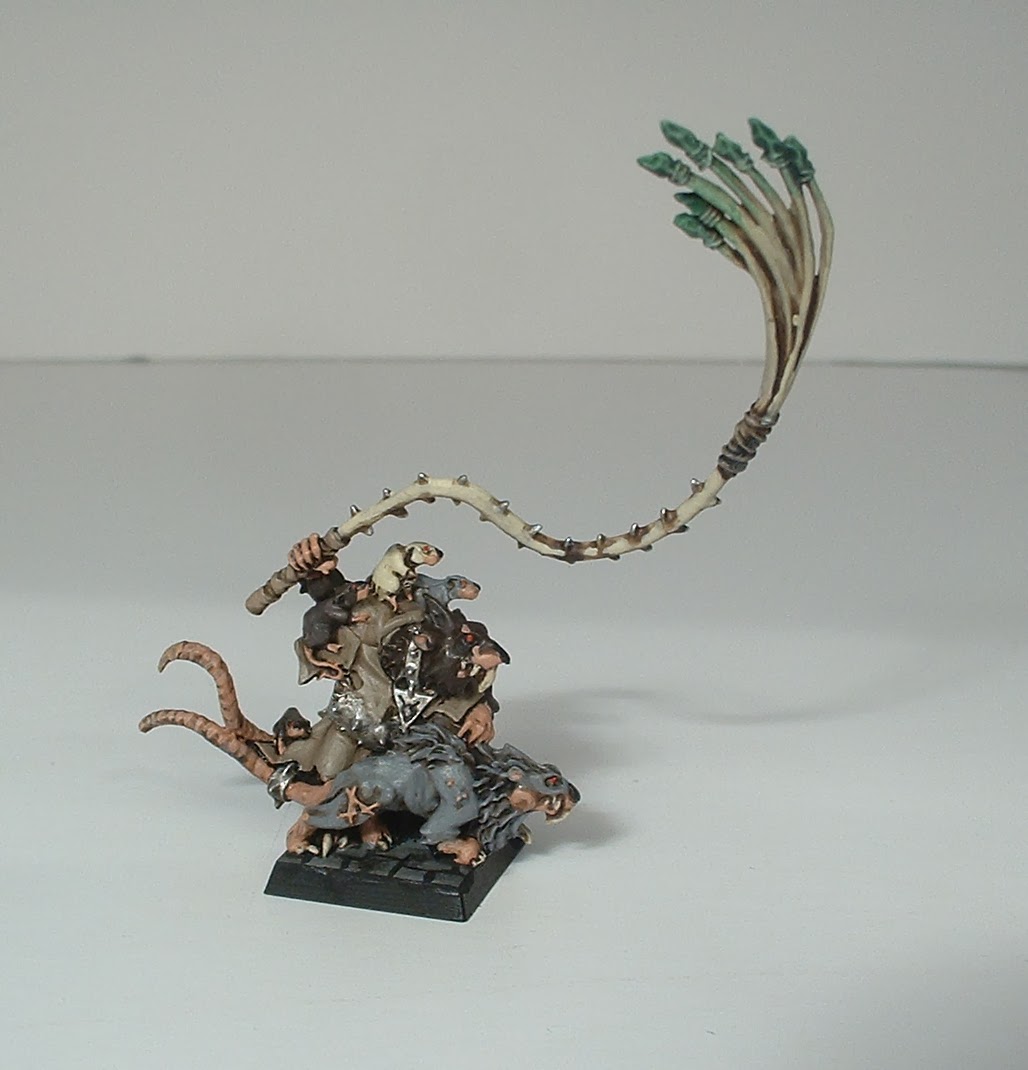 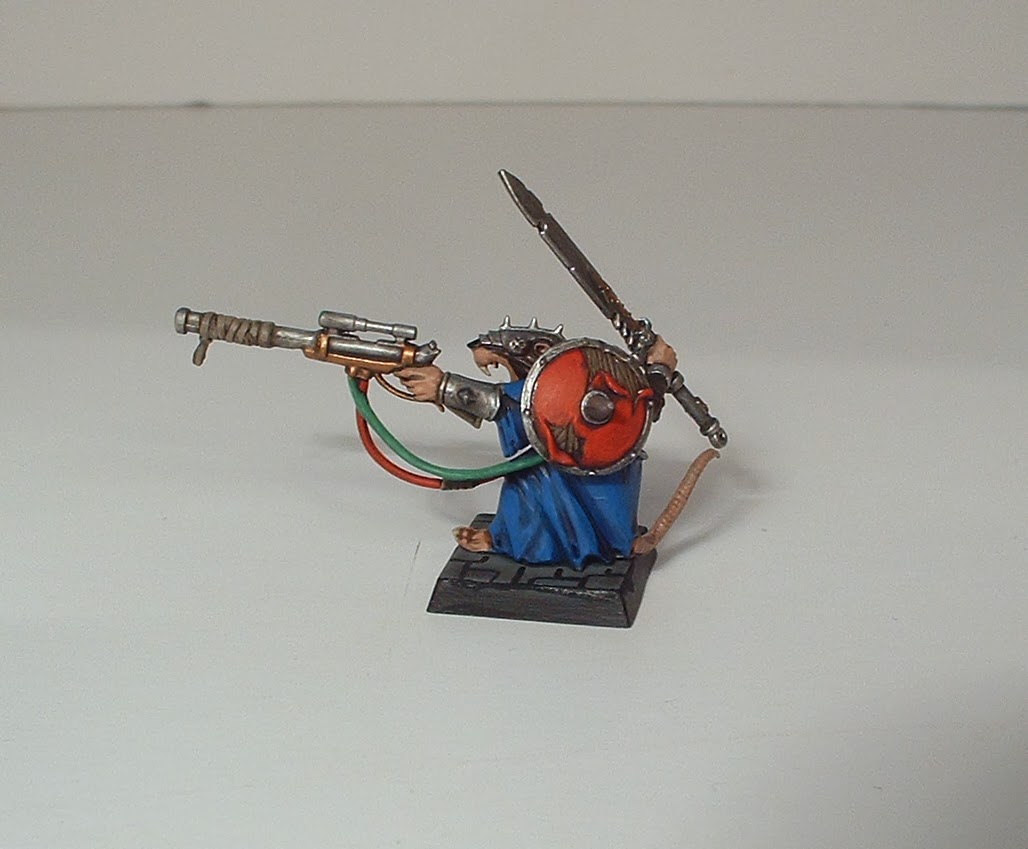 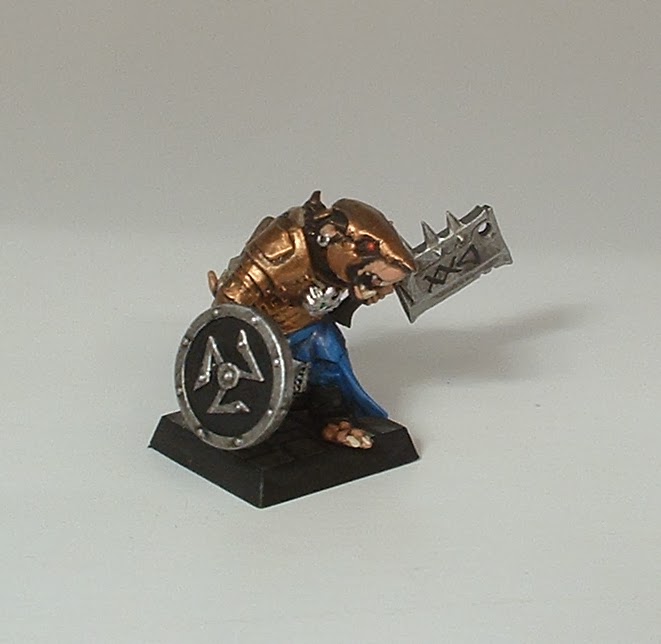 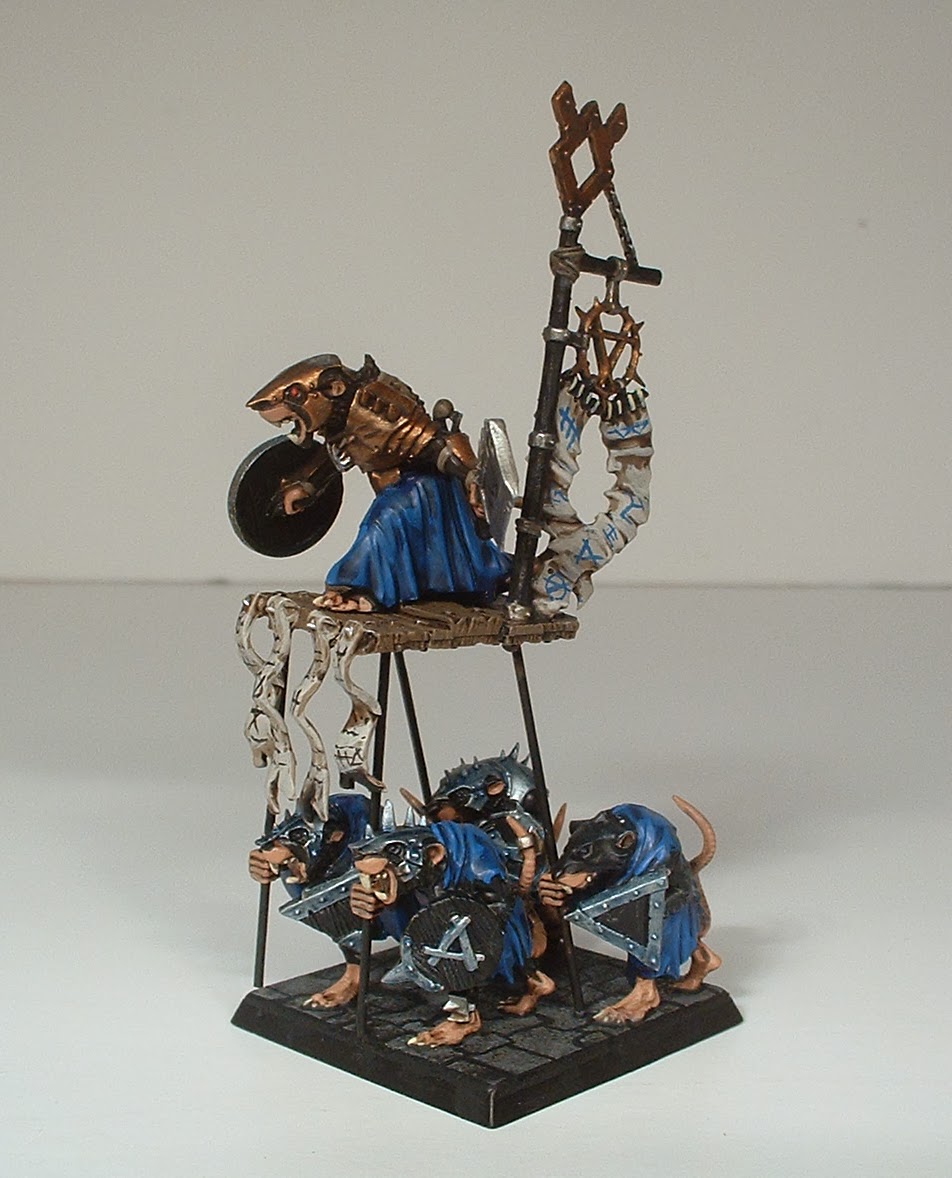 I will admit that there is 1 model for the Skaven army that I still don't have that I want and that is a Ratling Gun.  However, since it would require me to buy more models and then some plasticard that I currently don't own I'm going to stop here for now.  This gives me a large collection with tons of options for the army.  Also, I didn't take a picture but I did complete another 21 Clanrats/Slaves and another Rat Swarm/Unit Filler.  I'm happy that I finished these and while I'm disappointed that I didn't get a new Dwarf Army Book this weekend it did keep me from pushing these aside and thus let me finish them off before the new book.

So I'm left here with 1 item notched off of the checklist.  Also, since I'm discussing that I should state that I bought a new board game (No Thanks!).  That makes only 4 left for the rest of the year.  God this is going to be tough to stick to because there is another game that my wife actually wants and that I want which I'll probably be discussing in the future.  Another couple of things that I have to report on is that I have attended the first local event in Bloomington in January which I took Best Overall in.  I'm also preparing to attend another one in two weeks which will give me 2 of 5.  Excited!  On to what I'll be working on until my new Dwarf units and book come out, I pulled out more terrain for my 5 tables.  Hi ho, hi ho, its off to work I go!
Posted by Joe Flesch at 3:00 PM