Wow...  Seriously 40 days since I last posted about the Bretonnian army and I'm showing a serious lack of dedication to this army.  I don't know why; but I absolutely hate painting horses.  Something that bodes unwell for this project.  That said, since its been so long I decided that I should post some kind of update as to how things have been going.

On Oct. 14th I posted that I'd finished the 1st 8 man unit of Knights.  Somewhere between there and I'd say early November I managed to complete a unit of 16 Peasant Bowmen with Command, Brazier and Stakes as well.  I shortly after that began work on the 2nd unit of Knights but that has been very slow going to say the least.  I got distracted and painted up the unit of Rat Ogres for the Extra Life gaming and then with Thanksgiving and our 2nd season of Blood Bowl running strong just haven't gotten myself to sit down very often.

I'd say most of my hobby time in early November was spent slowly building movement trays for the army.  They are made of a pressed birch plywood paneling used in remote control airplanes.  I use basswood square strips for the edging.  All of this can be procured from most local train/plain model shops but I buy most of my stuff from Hobby Lobby.  I've also ordered metal tray inserts that will fit inside of these trays from Shogun Miniatures whom I also bought all my movement trays for my Skaven army.  I decided to make my own for this army though and just get the inserts this time around.  Flock doesn't adhere to the metal flanged trays well and the paint scratches off easily too.  Yeah, this cost me a little more in the end but quality and end result should be worth it.

The last two weeks I've been getting in practice Team games with Ryan and refining lists.  I'm still unsure of a Trebuchet because of its unreliability; but it also gives us a higher chance to stop things like Steam Tanks, etc...  I've also been building a unit of Pegasus Knights.  I would just like to state for the record that I dislike having them on a tray, but it just seems to make sense to me in this edition.  I've clipped them pieces of rod to keep them at difference heights and so that when you push them together for the charge they can actually touch bases; this left the bases looking quite naked so I've added some bits and pieces to them for show.  A piece of ruined archway from the Abomination kit.  Some slate rock and a gravestone to another and finally a tree trunk which was once a Giant club.  Below are some pictures for perusal. 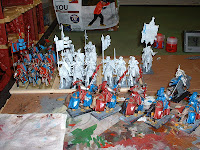 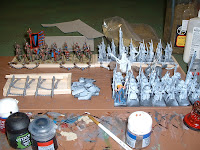 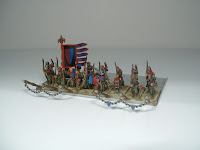 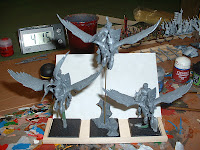