Age of Sigmar : Death of Warhammer 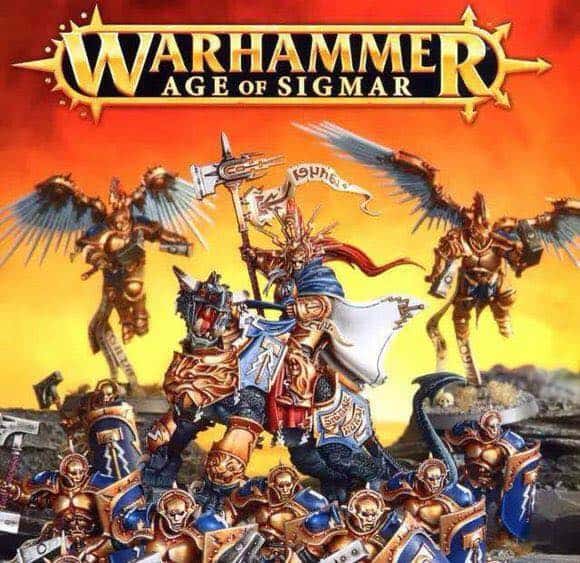 Welcome to the Age of Sigmar...

Or so it is told.  Here I am on June 30th writing this post looking at the pictures, rules and warscrolls (I.E. Army Book) of the new starter set.  As told currently Warhammer Fantasy Battles is dead.  The books have all been pulled and are no longer for sale.  White Dwarf is touting this new game as an entirely new system and for the most part it is indeed quite new.  It seems to me that it is pulling mechanics from damned near every current game system out there.  We've got skirmishing models, simplified rules, rules in box with models, on-line .pdf's containing rules which can be updated when desired.  Sure we've still got plenty of what were used to with GW as well.  That is to say amazing models, poor customer communication and an utter lack of answers to any of our questions.

Many of the questions fall back at this point to, how do we construct armies?  According to everything we've heard thus far from GW the rules are "Take whatever, however you want."  Now I know that GW doesn't consider themselves a company that designs a game for tournament or competitive play, but this just makes no sense.  People are raging over it and the inability to understand exactly what GW's plan is for this game.  I am of the opinion that everything we have seen so far is just the contents of the "Starter Set" and that we will see more things coming in the near future.  A larger more filled out rule book.  Army books that will add additional rules and intricacies to the game, etc...  I'm using book here interchangeably with .pdf as GW has also stated that as of July 4th not only will the core rules be available as a free .pdf on their website but so will updated warscrolls for all of the currently existing armies.

Today the 4 page rules were leaked from the next issue of White Dwarf.  The rules are awfully simplified but I can see where the strategy will begin to develop.  I've played 40K in the past and I understand how important it is to do certain things.  I think that currently one of the biggest changes was the removal of all of the number charts.  No longer do you compare WS, T, S, I, etc...  Now each warscroll for models will contain a statline that simply says the weapon, the number required to hit the enemy, number required to wound and how much of a penalty the weapon gives the opponent to their armor save.  Wow!  Now that's a change.

I've spent a lot of time in retrospective thought.  I have roughly between $10-15,000 wrapped up into the Warhammer system when you look at armies, books, tables, terrain, bags, etc...  That's a lot of damned money over the last too many years.  Too much for me to just quit, that's for sure.  When the rumors first came out I said to most people I discussed them with that I hoped for a new Ravening Hordes.  For those who don't know, back between 5th-6th edition GW published a get you by document and discontinued all of the army books.  This was probably the most balanced the game had ever been as each new book tends to creep up in power.  Honestly, having looked at the rules now I think I may have inadvertantly gotten my wish.  The fact that all the books are discontinued to be re-released as .pdf's on the website in the next 4 days means the game may actually be balanced.

I still believe that soon we'll probably see more releases.  Maybe a larger rule book with all of the special and intricate things in it.  However, maybe not.  If this is where Age of Sigmar hits and stays then it will all come down to the rules being released for the armies.  If the game is too simple without enough tactical variation then it will like die a very quick death.  I'm going to do something rare here and be the optimist.  I can't wait for the rules to come out and get a game in as soon as I possibly can.  I'm hoping it's great but only time will tell.  So for those of you raging out there; stop!  Give it time and give it a fair shake.  you may be surprised at your decisions afterwards.
Posted by Joe Flesch at 8:04 PM