So I've finished assembling my Regiment of Renown and I've finally come down to the painting stages. I'm quite excited about getting into this part of the process. I've purchased every green paint GW makes so that I can experiment with multiple green color schemes on my Orcs as I don't plan on having them all a single color. I feel it will add to the mob variety and the army will look better because of it. I could of course be wrong and they might look terrible; but I rather doubt that.  So let's begin shall we.  First a quick look at my guys and then the paints I'll be using. 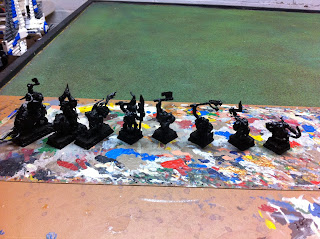 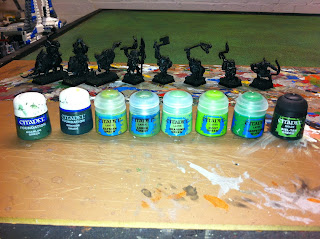 And here are the multitude of greens I'll be using.  For these first 3 models that I'll be working on in this article I'm actually only using three of these paints; but I'll get to the others.  While I don't bother to show the rest of the paints I use I do tend to use rather limited numbers of other colors to help me stick with a unifying scheme.  Even though they wont all have those same colors in the same places I think it will overall help pull the units together.

For this article I'm only going to show three models and more later; but for now we're going to concentrate on my Arrer Boy, and two Orc Boy'z.

Just above you can see the primary colors laid onto the models along with their first washes to begin the shading processes.  I've never actually painted fire and so have no idea how.  For the Arrer Boy I used Loren Green; the Orc Boy with the Flail got Orchide Shade while the final Orc Boy was given Knarloc Green and all a wash of Biel Tan Green.  The look of the torch is pretty terrible in this picture; but rest assured that I change it later and that it ends up looking much better.

With that first set of washes dried you I begin the process of lightening up the layers of the model.  For the most part this section is just a layer of the original colors and a 2nd lighter wash, but the skin tones were done at a 3:1 ratio of their base greens with Bleached Bone.  This in turn received a lighter wash of Biel Tan Green to dull the transition of colors.

Here we see a couple new things to add.  I've done a third layer on the skin mixing the base greens used with a 2:1 of Bleached Bone.  I've also covered the cork with heavily watered down coat of Vermin Brown.  The other layers of things like packs, skin tones, etc were with washed out (watered down) base colors.  You can also see here that I've started fixing the torch with a multitude of washes over a white base coat.  Started with a heavy wash of yellows, then progressively moving up into the oranges and reds.  I've also begun adding dags of color to models as well as the skin on Mr. Pig.

Yet more progression of basically everything.  I've begun filling in details here such as eyeballs, teeth, claws, etc...  I've highlighted up many parts and layered up metals, pants, etc...  I've also begun painting on checkered patterns to places that I wanted to do checks with.  Still working on darkening up the torch fire as well.  I've also given the bases a heavy wash of Nuln Oil to darken them up before they receive their Bleached Bone highlights which you'll see below.

Finally I added checkered patterns to some helmet flaps, side pieces and a sword.  I should say; I'm not that great with checkers and I think these may have turned out a bit on the bright side.  I tried to give a scraped up weathered effect to them; but I'm not 100% on it.  So with that done and a few final bits and of highlighting and a little spots of shading or fixing tiny mistakes I'm basically done with these guys.  They turned out great I think.  Excellent for a weeks work and I think have really got me on my feet as far as moving forward with the army is concerned.  I like how they turned out and excited to continue on. 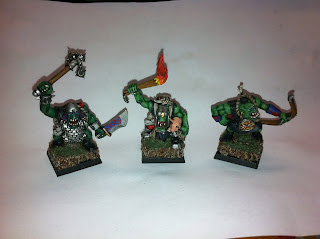