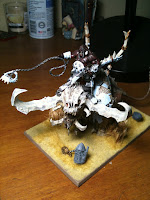 Better late than never right? Anyway, I am still working on the Ogres even though I did not get them done by the ToFG time frame. Congrats to Joe for being the only one of us to do so. I have, however, recently finished up the Stonehorn, and figured I would throw up some pictures for you. 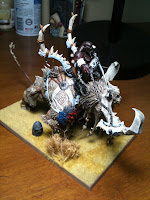 I have only played about 4-5 games with him at this point, but so far I like him. I get a little over zealous with him, and he has never survived an entire game for me. I keep running him off on his own and he ends up dying, but he does take out plenty with him. I just have to hold him back an extra turn and send him in with the rest of my army, and he will be great. 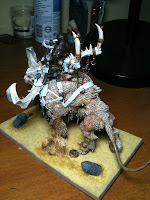 He is also a great cannon magnet. He halves all multiple wounds that he takes so it will take 2 very good cannon shots to take him out. Since he has 6 wounds, it is more likely that it will take 3 shots to kill him. 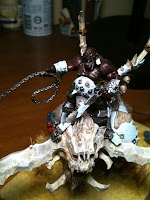 Up next for me is a couple more Ironguts to paint for the 1000 point tournament at Adepticon, but from there I have to get back into gear for 2400 points of Blood in The Sun, and paint up an Ironblaster, 4 Mournfangs, a Tyrant BSB, and possibly a Firebelly. Wish me luck on getting everything done, because I am going to need it.